The small Tadpole had camped with us overnight but this fine Saturday morning meant that she was all set to depart to Jasmine's birthday party back in Chatham. Don't speak it too loud but unwashed, we all piled into the Toadmobile and set course for home, via a McDonald's Breakfast I will admit. Once back at the ranch we ate (always first), washed and dressed and then dropped said Tadpole at her friends for her overnighter. We, on the other hand, made our way back to Wheatley, albeit via some delightful sandwiches in The William Street Cafe.

Back with Towed Haul, the weather had changed as the wind had come round from the north to the south west, bringing warmer temperatures but also some clouds. Not that it stopped us living it up on the patio mat underneath the awning, drinking and eating as is our wont. Yes, I did take the hound for a walk but other than that it was all systems camp.

Wheatley is a nice little Park. There are four campgrounds, only one fully electric and one partly electric; can you guess which campgrounds were the fullest? We Ontarians (and a few US visitors) do like our electrically powered home comforts. There were a few hardy souls out in their tents but mostly it was us trailer trash occupying the place. The sites themselves are, for the most part, roomy and flat even though after last week's rain some of them were a little boggy. Children have been very evident this weekend, skidding around on their bikes and generally having a good time. There is a beach here but it's at the base of a steep muddy bank and isn't, by any stretch of the imagination, a beautiful white sand strand, which is probably why the chief occupation here seems to be angling and bike riding.

The hound has been attracting attention, too. Variously mis-recognised as a Great Dane or a Whippet, she is always made a fuss of, even when she's being her most unfriendly. We're always asked if she's a rescue dog, which she is, but I'm far too polite to point out that all Greyhounds are rescue dogs; to be churlish isn't in my nature, so we smile and say yes, she a rescue. I think Willow enjoys these weekends away as she likes to gather new smells for her database and snuffle about in the weeds. That said, she's always quite keen to head back to Towed Haul and can get quite agitated if we take a turn away from our site rather than towards it. Of course, the way to tell that a Greyhound is OK is to watch the poop; if it's runny then she's stressing. I can report, dear reader (because I know you want to know) that all is well in that department.

Being active types, we both took a nap in the afternoon. We read, too, and we had a supper of Tortellini Soup and bread and even (gasp!) had a walk to the lake in the start of the evening's rain, hardy people that we are. The bugs have been busy this weekend and despite taking precautions, we're still mottled with bites; given the time of the season and the recent rain I suppose we shouldn't be surprised but itchy legs are the order of the day.

We decided to settle into the third season of Breaking Bad on the DVD in the evening, only to find that the disc wasn't in the box; cue disappointment on a grand scale. We did settle to watch old Denzil in The Manchurian Candidate and I enjoyed it so much that I slept through four fifths of it and suffered some staggeringly bizarre dreams into the bargain. Such is the life of the weekend camper.

Our final activity of the day was to walk the hound, which is always nice at midnight. Most of the campground was in darkness but there were a few people out under their awnings playing cards and inhaling wood smoke from their camp fires; there's no rowdiness, though, as these parks are patrolled and folks in this part of the world are mostly law-abiding. Mostly.

As we retired we knew that we were in for some rain in the night so I was hoping that it wasn't so stormy that I had to go out and fetch the awning in at two in the morning. Still, as I have already said, we're hardy folk and campers to the core so it's all part of the adventure, isn't it? I wonder if I'd be as positive whilst wrestling with the awning in the dark?  Let's have a quiet night, please! 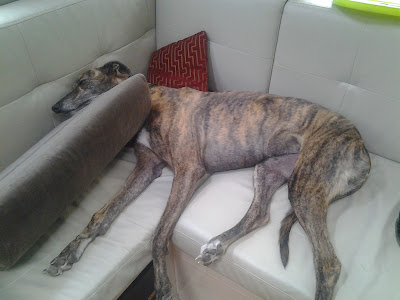